Home » About Us » Pastor Gatling 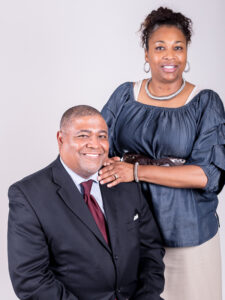 Derek V. Gatling became the servant leader and Senior Pastor of First Baptist Church Jericho (FBCJ) in January 2016. He is the seventh pastor in the church’s 105 year history. The vision God has given Pastor Gatling for FBCJ is shaped from the Gospel of Luke 4:18-19, “The Spirit of the Lord is upon me, because he hath anointed me to preach the gospel to the poor; he hath sent me to heal the brokenhearted, to preach deliverance to the captives, and recovering of sight to the blind, to set at liberty them that are bruised, To preach the acceptable year of the Lord.”

Vision
Led by the Holy Spirit, we will preach the gospel through holistic (spiritual, social, economic and political) development of our community to uplift and glorify the Kingdom of God while effectively developing disciples of Jesus Christ to bring the transformative gospel to the community of unbelievers.

Ministry
Called by God into ministry at an early age, Pastor Gatling formally entered the ministry in 1993 and preached his trial sermon, The Good News Must Be Told at Bethel African Methodist Episcopal Church in Moorestown, New Jersey. He was ordained in the AME Church in April 1995 and began pastoring his first church in 1997. Pastor Gatling was blessed to serve as the senior pastor for 12 years at several churches in the South Jersey area.

In 2011, Derek Gatling and his family began attending FBCJ, eventually joining and working under the leadership of former Pastor Clabon Bogan, Jr. As an associate minister at FBCJ, Derek worked as the liaison for the Youth and Outreach ministries and also worked as a co director of the Couples’ Ministry alongside his wife, Kerri H. Gatling.

In July 2013, Derek was ordained in the Bethany Baptist Association of Southern New Jersey and was elected pastor in November 2015, assuming leadership upon the retirement of the very erudite Pastor Clabon Bogan, Jr. who led FBCJ for 22 years.

Family Derek Vaughn Gatling was born on June 2, 1969, in the Bronx, New York and raised in East Orange, New Jersey and completed his last two years of high school in Fayetteville, North Carolina. He is the only son of Minister Rosa H. Brown and Ronald M. Gatling.

Pastor Gatling’s life partner in marriage and ministry is Kerri H. Gatling, a native of Mount Laurel, New Jersey. The two met while students at North Carolina State University and were married on June 26, 1993. Understanding their first ministry is their family, the Gatling’s are the parents of three: Myiah, Derek II and Elija. Kerri supports her husband’s ministry and currently serves on the Women’s Ministry leadership team.

Career Pastor Gatling has worked as an adjunct professor at Palmer Theological Seminary and immediately prior to being elected pastor of FBCJ, worked for several years as the manager of Community Affairs for the nonprofit organization, Mid-Atlantic States Career and Education Center in Pennsville, New Jersey. In this role, he chaired the South Jersey Community Reentry Coalition which helps individuals previously incarcerated to transition back to society; he helped to establish the Community Shuttle of Salem County which transports county residents to employment opportunities in the surrounding areas; and trained employees throughout Southern New Jersey on food and sanitation safety.

Pastor Gatling also has worked as a Community Organizer for Camden Churches Organized for People and as Regional Account Executive for Wachovia Bank, where he managed accounts for education loans to higher education institutions in New Jersey and New York exceeding $63 million in volume.

Education
Pastor Gatling earned a Bachelor of Arts degree in Political Science and minor in Secondary Education from North Carolina State University (1991) and a Master of Divinity degree from Palmer Theological Seminary (formerly Eastern Baptist Theological Seminary) in Wynnewood, Pennsylvania (2012). He honed his leadership skills by earning a certificate through the University of Pennsylvania’s Wharton School Executive Community Revitalization Leadership program and also holds a teaching license from the State of New Jersey.